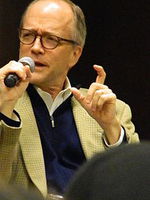 is an author of eight books, including Sinatra in Hollywood and the national best selling The Sound of Music Story. He has managed over twenty-five Broadway shows during the past thirty years.  Tom is a Rat Pack Music Alliance Advisory Board member.

"Yes, Tony Rome's debt to Raymond Chandler (The Big Sleep; Farewell, My Lovely" is noticeable, but it all works, and at times even feels fresh because the persona of a private investigator fit Frank Sinatra perfectly. Audiences expect detectives to resemble their idealized version of Frank Sinatra: the man in question has been around the block more than once, is bruised, tough, cynical yet still possesses a small private reservoir of hope. Tough with men, wary with women, the chivalrous knight who has seen it all but still fights the daily fight- it all fit Frank Sinatra like one of his custom-made suits."

David Lehman is an American poet, non-fiction writer, and literary critic, and the founder and series editor for The Best American Poetry. He was a writer and freelance journalist for fifteen years, writing for such publications as Newsweek, The Wall Street Journal, and The New York Times. In 2006, Lehman served as Editor for the new Oxford Book of American Poetry. He taught and was the Poetry Coordinator at The New School in New York City until May 2018.

Thanks to David Lehman for this passage from his book - One Hundred Autobiographies: A Memoir (Cornell University Press, 2019)

At the Las Vegas hospital, night shift were taking bets on the exact moment certain terminally ill cancer patients would kick the bucket. Good sporting proposition, but the lottery was fixed. Head nurse, in cahoots with an underling, pulls plug on life-support system at just the right moment, and the intensive care ward explodes like the victorious home crowd at the seventh game of the World Series.

Baudelaire: "Life is a hospital where the patients keep changing beds."

The wards have individual booths where the patients can watch nonstop cable television news while they drink the vile concoction that will illuminate their internal organs when their bodies slide into the X-ray cylinder for their Catscans. On arriving I am complimented on my fedora: a two-toned black-and-brown Stetson from (I would guess) the early 1960. I agree with the French critic who said that the most interesting thing about Some Came Running is Dean Martin's hat, which he wears even in bed, even in a hospital bed. But he demands his release though the doctor says his condition is very serious indeed. Diabetes, possibly terminal. And you have to give up drinking. That'll be the day. And then gunshots that were meant for Frank Sinatra kill Shirley MacLaine. It's an incoherent movie, and the song that Sammy Cahn and Jimmy Van Heusen wrote for it gets sung by a bland roadhouse trio, not FS (though he did record it memorably). But Dean Martin's hat is the best joke in the movie, and not just because it's the only one.

"Republished by permission of the author. Copyright c 2020 by David Lehman. All rights reserved." 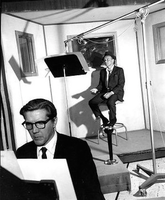 When I asked Bill Miller how he started with Sinatra, he said, at that time he was performing in Las Vegas in September 1951, with his own trio:

"I was doing pretty well and in good shape, and understood he (Sinatra) was going to make a change in the piano chair, and well I happened to be in the right place at the right time. His manager asked me to do a TV show they were about to film, and I said 'Sure, I'd love it. And that's how it happened. Real simple and easy."

"When we were recording "One for my Baby and One More for the Road"
on the Only the Lonely album, we ran it down once, rehearsed it, then recorded it in one take, believe it or not."

It is a pensive intro that glories that opening to one of Sinatra's best recordings. The intro that Miller invented contained the tinny sound of a saloon piano and was kept musically in a tipsy frame-of-mind-playing form.

The piano works its way throughout the recording and is the final, failing wipe-out that takes Sinatra out of the saloon and moves him out of sight. There is a ding echo prevailing that the piano performs as a final bevy of goodbye notes.

"Frank usually would let me do what I wanted on the up-tempo pieces but on the ballads you had to kinda underperform to keep him happy. I would work in some nice changes which I managed to creep in gradually. He would usually like them, so we worked together well because I knew him and how he needed to be satisfied musically. I knew him and he knew my piano."

Bill Miller was one of the privileged insiders within the Sinatra circle.

"Once I figured out what I was going to do on any particular tune, we kept it that way. When I played, it's only with minor variations, because Frank is used to it a certain way, and it works. So why not leave it alone, I always said."

Millers' contribution helped shaped the rhythmic background for many Sinatra hits including "Fly Me to the Moon," "The Lady is a Tramp," Ervin Drake's "It was a Very Good Year," and "My Way."

Bill Miller passed away in Montreal while traveling with Frank Sinatra, Jr. He was 91 years old and still playing for the Sinatra's.

When his first boss, Frank, Sr. passed in 1998, Bill Miller played "Once for My Baby" at his funeral.